With a lockdown in force in Australia due to the outbreak of COVID-19, Anzac Day in 2020 was very different to other Anzac Days held on 25 April during the past 100 years.

In Victoria, the Dawn Service is held each year at the Shrine of Remembrance and is then followed later in the morning by the annual Anzac Day March along St Kilda Road to the Shrine. Another service is then held around 12 noon. Services are also held in other states as well as services held at the Australian War Memorial in Canberra. Later, television viewers can watch the Dawn Service at Gallipoli in Turkey followed by the service at the Australian National Memorial at Villers-Bretonneaux in France.

Commemorative services are also held at many RSLs throughout the country.
In 2020 these commemorations generally were cancelled except for services at the major memorials where attendance was limited to a small number of dignitaries but made available to the general public via radio and television.

This year many household residents arranged their own commemorations, either individually or collectively within a street. The dawn ceremony held at the National War Memorial in Canberra was broadcast beginning at 5.30. The suggestion had been made that household residents might like to listen to the service standing with a candle or torch at the end of their driveway or on a balcony. This allowed social / physical distancing to be maintained but, when a number of people in a street took part, also allowed for community participation. In some cases a local resident played the last post. Many families took part in this activity throughout Australia. 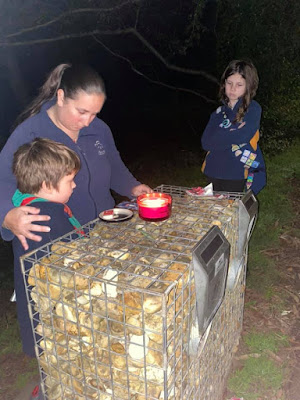 Many residents also made wreaths to display on front gates, from balconies or in windows. Australian flags were also on display in some locations.
Anzac Day 2020 was certainly different from those held in the past but the day was still commemorated though in a different way.
Posted by Vicki's Blog at 19:32 No comments:

At 11 o'clock on 11 November 1918 the Armistice officially ending the hostilities of World War One was enacted.

When recently in England and Wales we saw a number of war memorials erected after World War One commemorating those from the local area who had died during the 1914-1918 war. After the Second World War additional plaques were added remembering those who died in the 1939-1945 war.  In some towns there were also memorial gardens. As well, memorials to those who died in war can often be found in churches and other buildings.
The following posts provide information about some of the memorials that we saw on this visit to the UK:
Tring, Maldon, Kings Lynn, Pershore, Cirencester, Horsham, Crawley, Sutton and Tunbridge Wells in England  and Abergavenny in Wales.

Some towns had changing displays during the past four years remembering specific battles that took place during the Great War. Crawley created a Heroes Walk in the Memorial Gardens while St John the Baptist Church at Cirencester devoted a corner of the building for changing displays relating to the First World War.

The population of the communities where the above memorials are located would have been much smaller than they are today. For the ten memorials in this group of posts the names of more than 3000 men and several women are recorded as losing their lives during the First World War. Huge casualty lists in small communities. The numbers of the injured were much larger. The memorials serve as a reminder of the loss of life a century ago as well as in subsequent wars and conflicts.

The loss of Australian lives plus people injured was also massive. Australia's population one hundred years ago was approximately five million people. Approximately 62,000 Australians died during the First World War. Another 156,000 were listed as injured or taken prisoner. Nineteen thousand of the Australians killed in action were from Victoria. (Australian casualties)

Remembrance Day services will be held throughout Australia and England and most other countries on 11 November.


Lest We Forget
Posted by Vicki's Blog at 11:09 No comments:

The Tunbridge Wells War Memorial was dedicated on 11 February 1923. The memorial is in a prominent position in the main street near the town hall, library and museum. 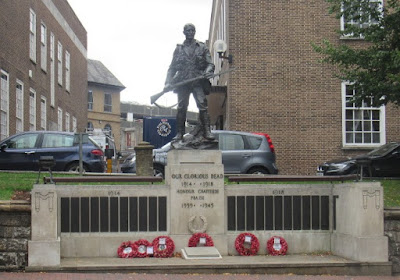 The names of 801 servicemen who died serving their country during the First World War are inscribed on plaques on the memorial wall. A further 171 names of those who died during the Second World War are entered on additional plaques.

The Sutton War Memorial was dedicated on 26 June 1921 in memory of the 518 servicemen and one women from the area who died during the First World War. 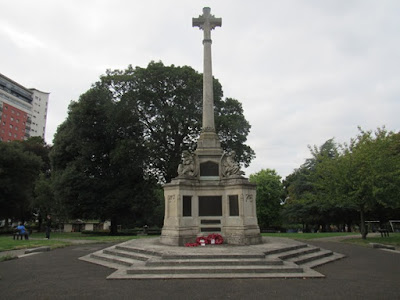 In January 1921 four acres of land was set aside as a memorial park where the memorial is now situated. Plaques containing the names of the fallen are on the sides of the memorial. There is also an inscription to the memory of those who died defending their country during World War II.

A memorial to those who died in World War I is situated in front of St John's Church in Crawley. 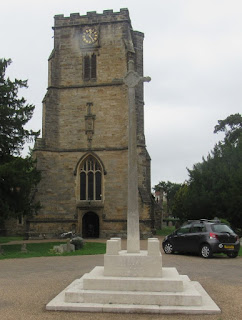 The memorial commemorates the residents of Crawley who were killed or went missing in World War I (34 names) and World War II (19 servicemen and 9 civilians). On several occasions during 1943 and 1944 doodlebugs were dropped on the small community of Crawley resulting in the deaths of nine civilians plus another sixty-nine people injured. 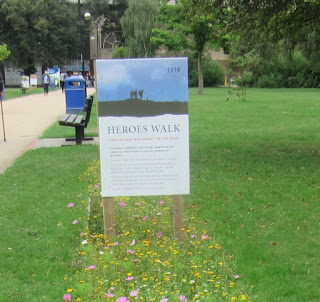 The Crawley Memorial Gardens were established in 1921 when money was raised by public subscription to purchased the required land.
Gates at the park entrance near the County Mall shopping centre contain rolls of honour - lists of the names of those from the area who died during two world wars. 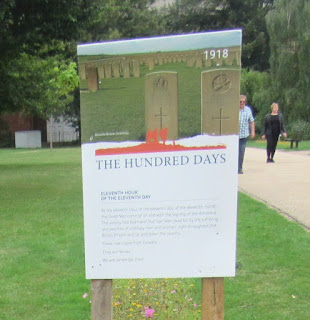 In 2014 the main path through the gardens was established as the Heroes' Walk as part of the commemorations for the Centenary of the First World War. Rows of flowers were planted from seed along each side of the path and display boards provide information about what was happening during the war one hundred years ago. When we were there the focus was on the last few months of the war leading to the Armistice.

The Horsham War Memorial was dedicated on 13 November 1921. The memorial commemorates and names the residents of Horsham who served and died during World War I (359) and World War II (119). 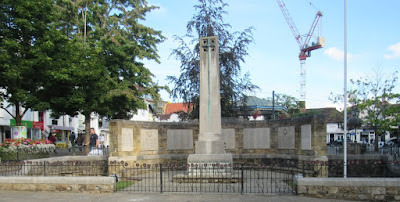 The names have been inscribed on the panels on the semi-circular wall behind the monument. 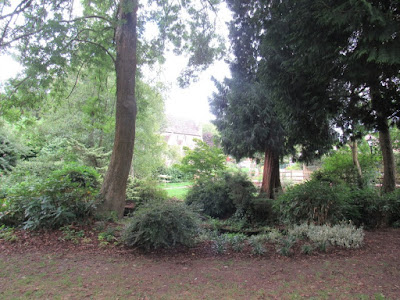 Near the cricket ground and the church is the Garden of Remembrance. 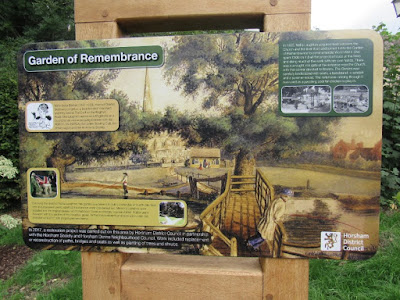 It was established to remember those who died while serving their country during World War I. 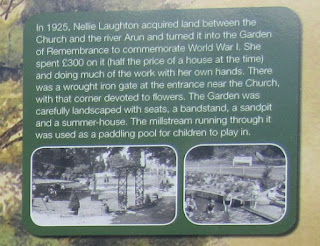 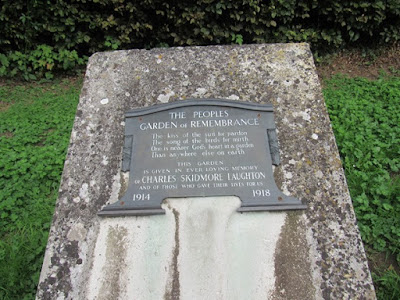 Walking into Abergavenny from the cricket ground, the memorial to the 3rd Battalion Monmouthshire Regiment stands looking down the main street. 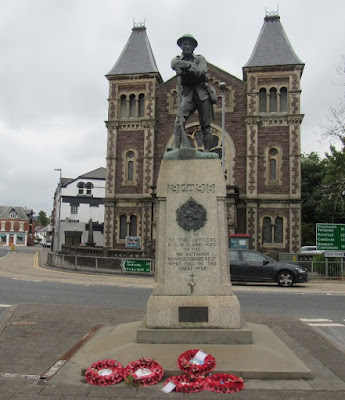 It honours the men from the regiment who died during the First World War and the Second World War. 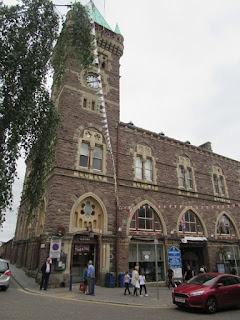 The Abergavenny Market Hall holds the war memorial for the district. 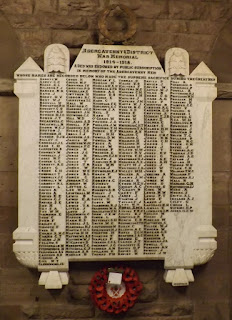 The white marble honour board lists the 276 names of men from the region who died during the First World War. (War Memorials Online) 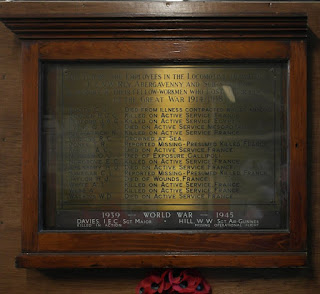 Nearby is a framed plaque erected by the employees in the Locomotive Department London & North Western Railway, Abergavenny and Sub-Station in memory of their fellow workmen who lost their lives in the Great War 1914-1918. (Military images) Two names of servicemen who died during the Second World War have been added. 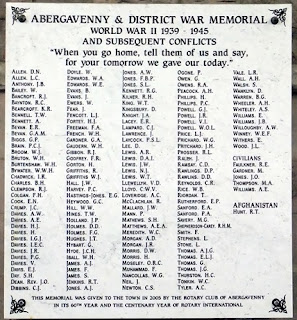 Also in the hall is a list of the names of those from the area who died during the Second World War and Afghanistan. (War Memorials Online)