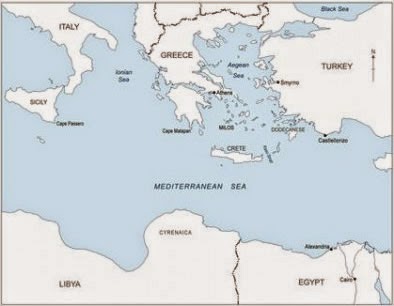 On 27 April 1941, instead of returning to Alexandria in Egypt most of the men of the 2/4th Battalion were taken to Suda Bay on the north coast of Crete. All was quiet when they arrived as there was a lull in enemy air attacks. After a short break, where they were provided with tea, biscuits and chocolate, they were on the march to their next camp site. That night they had their first real sleep in weeks under shared blankets and greatcoats. They left the camp early next morning to head to their next destination.
In the afternoon of 28 April they were joined by the survivors from the Costa Rica. Many of the survivors had no boots, and most had no greatcoats or blankets. It was necessary to locate extra food for the men and the staple diet became eggs.
They were on the move again the next day. Initially it had been suggested that they were to go to Suda Bay to return to Alexandria but instead they continued to move from camp to camp in the Suda Bay region. Arriving in camp on 29 April the men took the opportunity to wash their clothes. That night they heard 'Lord Haw Haw' on the wireless providing his version of the evacuation of Greece and stating that Crete was the next island to be invaded.

The next day was a rest day and in the evening the men staged an impromptu concert. However at the end of the concert they were told to be ready to move on again in ten minutes. The men who needed boots and basic equipment would stay until equipment arrived. They then rejoined their comrades. Because of the imminent invasion of Crete by the Germans, the men were to be moved further along the coast to help defend the airports. The men of the 2/4th travelled in the two destroyers, Hotspur and Havock, along the coast to Heraklion. At Heraklion airfield they joined forces with a number of other units.

1 May was spent settling into the camp and digging weapon pits. This became easier when stores including picks, shovels and sandbags arrived. The ground was rocky making the digging deep pits difficult. This included the pit toilets which needed to be filled in and re-sited regularly. Local women and children visited the area selling fruit, eggs and other food as well as offering to do laundry.

On 4 May A and C companies were moved to new positions closer to the airfield. The airforce at Heraklion initially consisted of twelve Gloucester Gladiators. By the time the invasion commenced two weeks later all the planes had crashed on landing or had been shot down removing the possibility of aerial back-up when the airfield was under attack.

Apart from German daily reconnaissance the next three days were relatively uneventful as plans were made to counter an invasion. A practice counter-attack between A and C companies was staged on 8 May and the signal equipment was tested. As most of the equipment had been lost in the evacuation from Greece make-shift equipment such as wall phones, with crank handles and operated with wet cells, borrowed from businesses in the town were used. Knowing that the Germans may land at the nearby beaches as well as on the airfield, some members of C company joined forces with the Black Watch to guard the area east of the town.
The Germans began bombing the area on 12 May and these raids became a regular occurrence building up to the most intensive bombing on 20 May. The men were prepared and fortunately were 'well dug in' which resulted in many lives being saved. Between 5 am and 5.45 am on 14 May bombs were dropped on one area occupied by C company while the other Australians watched in horror. Fortunately precautions were so good that there were no physical casualties however the men suffered from shock after this episode. Padre O'Callaghan was always available to help cam jangled nerves. His 'air raid tonic, - a flask of krassi - was also well utilised. Around mid-day the enemy fighters and bombers returned and once again fired on the area. Three Allied planes managed to become airborne and entered the battle - two were shot down while the other ran out of ammunition but managed to escape from the area. The bombers destroyed the airfield and the remaining planes still on the ground while fighters continued to strafe the area. There was much noise, dust and smoke during the raid but the battalion experienced no fatalities. Three German planes were shot down.
In the afternoon, apart from a few German reconnaissance planes flying over the area, all was relatively quiet. In the evening five Allied planes managed to land on the damaged airfield but departed the next morning leaving the men to improve and repair their weapon pits and defences, including bullet proof covering of at least part of the slit trenches. Over the next few days the air-raids continued, usually at lunchtime. On 16 May C company experienced another direct attack. 'Captain Rolfe, Lieutenant Pegg, CSM Harry Watts and the two signallers, Privates Mac Wilson and Ken Moses had just finished a spring cleaning....Rolfe and his two sigs hugged the bottom of their dugout as they waited for the scream of the bombs. Watts and Lieutenant Pegg did likewise in their well protected dugout. The bombs landed horribly close - ten feet away. Moses asked Rolfe if he was all right. Rolfe replied: "Don't wake me. I can hear angels singing." ' [White over Green page 152] Once again they had survived, however before the bombers arrived Harry Watts had been airing his clothes near a box of hand grenades and a splinter from the bomb blew up the grenades plus his clothes. All that remained was his hat badge and colour patch.
By the morning of 20 May it was obvious that something serious was about to happen and new strategies were discussed including anti-aircraft guns and small arms fire no longer being used when enemy aircraft approached. The emphasis would be on concealing positions until the first parachutists arrived. At 4 pm severe bombing of the area occurred and then all was quiet. Then the parachutists arrived. The sky appeared full of parachutes and it was estimated that 2,000 parachutists descended on the area, alive or dead. Fortunately they were scattered when they landed and had difficulty grouping together as a unit. The Allies charged out to meet them. Four men from C company died though almost ninety of the enemy were killed. The Germans who landed safely were those who landed away from the airfield zone.
The Regimental Aid Post had been set up in near by caves and the staff worked tirelessly treating the wounded who were brought to them on stretchers. The next day was spent looking for German snipers. Although bombers and fighters appeared in the sky they refrained from attacking as they probably thought their own soldiers were in the area. Stores and additional men were dropped from some of the planes. The Australian spent the next few days salvaging German equipment including parachutes to be used as bedding, arms and ammunition. A copy of the code used by the enemy for ground to air signals was captured and used on 22 May to encourage the Germans to drop supplies in the C company area. The supplies included a motor bike, ammunition, medical supplies and a wireless. This plan only succeeded once as the next time it was tried resulted only in more bombs.

The Germans, by now, had established some strong-holds, particularly on ridges around the town. In the evening of 23 May a lone plane flew over the area dropping propaganda leaflets - some in Greek and some in English. Additional stores and parachutists continued to be dropped on the areas held by the Germans and bombs dropped in areas held by the Allies. 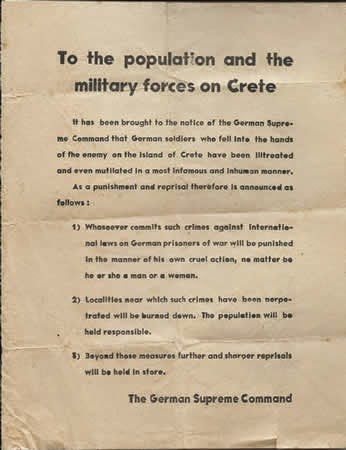 On 23 May explosions could be heard out to sea and the men later learned that a naval invasion by the Germans had been intercepted and destroyed. Battles between the Germans and the Australians and British continued.

On 29 May the evacuation of Allied soldiers from the area began and the soldiers moved back towards the beach. Most of the men from the 2/4th were taken aboard the destroyers, Hotspur, Jackal and Imperial but some were boarded onto Dido and Orion and a few on Hereward. Ken Moses was aboard the Dido. There were two other destroyers in the convoy, Decoy and the Kimberley. At 3 am the first ships sailed from Crete. Unfortunately the Germans located the ships. The Imperial was the first ship hit and the men were transferred to Hotspur.  Hereward was the next ship bombed and those on board were told to abandon ship. The survivors were rescued by an Italian torpedo boat and were taken to a P. O. W. camp in Italy. The next casualty was the  Orion which was hit three times. One hundred men died, including the captain and 200 were wounded. The ship managed to stay afloat and reached Alexandria. Decoy had also been hit.  The Dido was then hit on a forward gun turret resulting in many deaths and casualties. This ship also managed to reach port. An article about the bombing of the Dido, written by Ken Moses, was initially published in the Sunday Telegraph. Part of the article read:


At 8 am we copped ours. A 500-pounder came straight through the forward gun turrets above us, killing the crew, shattering our deck and the deck below us.
The lights went out, water pipes burst and the confined space was filled with cordite fumes and the sweeter smell of burning flesh.
There was no panic. Those that were left filled the empty 5.2 shells with water from the broken pipes and began putting out the fire that started to lick the walls of the magazines. The deck below was written off and all in it. Within a few minutes of the hit the ship's inter-com came on: - "This is the Bridge. We have been hit. Precious lives have been lost - but remember this is war. We are still in convoy and we have not lost speed. Thank you for youe calmness. We will make it."
Those who could helped stretcher parties to the sick bay where blood and water swilled around the feet of the ship's medical officer and army doctor. The surgeons started amputating. The casualty list in a fraction of a second had been approximately 250.

Back in Alexandria the sick were taken to hospital while the remainder were taken by train to the staging camp near Amariya, arriving in the early morning on 30 May. Comfort funds parcels were issued, the soldiers recieived their pay and they queued to send cables home to Australia. The next evening they were on the train back to Palestine.

Once again the book, White over Green, 1963, provided the basis for this post.
Other books on experiences of Australian troops on  Crete during the Second World War include:
Australians in World War II: Greece and Crete published by Dept of Veteran Affairs 2011 This publication is also available online
Diggers and Greeks: the Australian campaigns in Greece and Crete by Maria Hill 2010
Crete: the battle of resistance by Antony Beevor 1991
Websites include:
Australia in the war of 1939-1945 - Greece, Crete and Syria (AWM)
Greece and Crete (DVA)
Posted by Vicki's Blog at 17:05