The sudden change from the tension of Greece and Crete to the quiet and safety of Egypt and Palestine was something of a shock to the system. It was a pleasant enough shock, though; and one which time and rest soon overcame. [White over green page 197]

On 1 June 1941 the battalion was back at Kilo 89 in Palestine. From there they travelled to Khassa where they rejoined battalion members who had gone to Palestine directly from Greece. Rest camps were organised at Askalon Beach. By the end of June they were back at Julis, a camp they knew well. A decision was made to reform the unit's brass band. Most of the instruments had been stored in Palestine. Two of the other battalions had lost their instruments so a composite brigade band was established. The band played at parades, guards and other ceremonies. Some of the men took leave visiting Jerusalem and Tel Aviv.

Training was the main activity for the following months. Films were used for the first time as an aid to training and lectures on a variety of topics were held. Regular physical training ensured that the fitness of the men was maintained. In August Ken Moses attended AIF School of Signals training. In September the men were shown films on tanks and gas warfare. There were range practices at Jaffa and many day and night exercises in the field were undertaken. Sport was not forgotten and the battalion shared fourth place in a divisional sports meeting held at Hill 69.

In October the 2/4th Battalion was on the move again, this time to Syria. Winter was coming. The country was described as 'dreary'. At night the men huddled in two by four "pup tents" - small basic sheet shelters - in wind swept valleys or sheltered behind sangars - temporary stone defensive constructions - built on the Anti-Lebanon Range. It was feared that Germany might stage a new offensive through Syria as a diversionary tactic so Allied soldiers were ready to move in if this should occur. The 2/4th was to be a reserve battalion and in the meantime developed designated strategic defences - hence the construction of the sangars in the mountains. They also assisted in the construction of tank traps.  The men were also required for guard duties at various locations.

Four day leave passes were granted and used to explore the area including Damascus with its links to ancient history. Other recreational activities were described as limited. The canteen was described as 'dark and dingy' and beer supplies were limited. There was not much to do in the evenings. 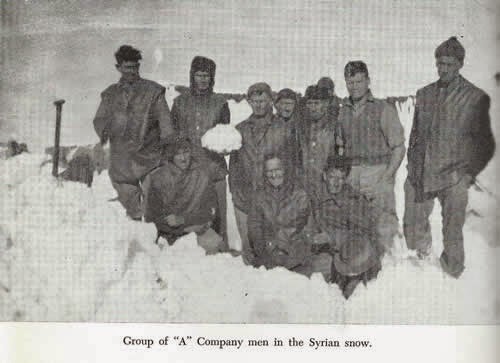 Winter came rapidly and work in the mountains had to stop. A few days before Christmas it snowed and the men from Australia experienced a 'white Christmas'. Traditional Christmas dinner was served in the individual platoon huts. This was the second Christmas overseas for members of the battalion. The previous year they had been waiting to go into battle. This year there were concerns about what was happening at home now that Japan had entered the war.

Christmas for Ken Moses was spent in the 7 Australian General Hospital where he was treated for twelve days. His medical report shows a number of occasions when he was in hospial or on the "X" list, usually being treated for bronchitis.

On 8 January, Ken was appointed acting corporal until the end of the month. Towards the end of January the 2/4th Battalion left Syria to return to Palestine, initially to Hill 69 and then to Port Tewfiq. On 12 February 1942 they were aboard the HMT Rajula. However an hour after the ship sailed they returned to Port Tewfiq and were taken to a staging camp. On 19 February the troops were back aboard the Rajula. This time they sailed for Australia. 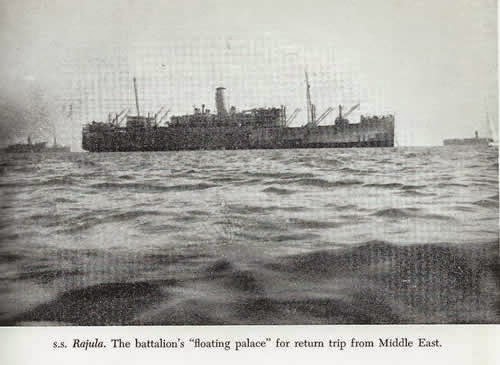 Apparently when they first boarded the ship their destination was the Far East. However after lengthty political negotiations it was decided to return the 2/4th Battalion to Australia.

The information for this post was taken from the book, White over green, published in 1963. The two photographs are also from this book.
Posted by Vicki's Blog at 12:01