A collection of photographs and documents, copies of Attestation Form and Service and Casualty Forms, articles sourced from Trove and the the book, White over Green, a history of the 2/4th Battalion as well as family stories are some of the sources used to find information about my father's experiences during the Second World War.

Shortly after the commencement of the Second World War in September 1939 Kenneth Campbell Moses applied to enlist in the Air Force but, as there was a long waiting list, he joined the Army instead. Ken was 21 when he and a mate travelled from western New South Wales to Sydney to enlist.

The first members of the 2/4th Battalion had marched into Ingleburn on 3 November 1939, two months after the Prime Minister declared that Australia would support Britain in the war against Germany. During the following two months batches of new recruits arrived at Ingleburn. Like Ken, many had left jobs in outback Australia to join the Army.

Ken's Attestation Form and Service and Casualty Form show that he passed the medical examination for the Army at Victoria Barracks on 2 January 1940 and from 3 January he was stationed at the Army Camp at Ingleburn as part of the 2/4th Battalion. His Army No. was NX9670.

The following day, in full uniform, the soldiers marched through the streets of Sydney.


There was little time to say goodbye to family and friends for at 12.30 pm on 10 January, members of the 2/4th Battalion were aboard the Strathnaver on their way to Palestine. Three other ships, the Ortranto, Oxford and Orcades, left Sydney with them and they then joined with six transports from New Zealand. This convoy was escorted on their journey by the Australian cruisers, HMAS Australia and HMAS Canberra plus the British battleship, HMS Ramillies. There were stop-overs in Perth, Colombo and Aden as the convoy continued on to Kantara on the Suez Canal, arriving on 13 February. An article in the Australian Womens Weekly 24 February 1940 described the departure of the ships from Sydney. My mother told me that Dad told the story that, when they arrived in the Middle East, he was asked to lead a group of soldiers off the ship - Moses leading the troops into the Promised Land. True or not it is a good story. 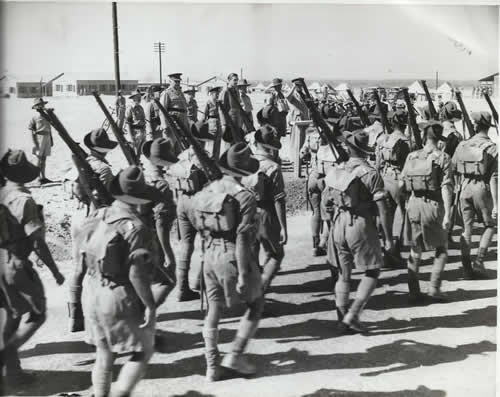 From Kantara they travelled by train to El Majdal in Palestine. The camp was known as Julius, L4 and was 15 miles north of Gaza. The soldiers then spent the next nine months training. This included route marches designed to 'toughen up' the men after months of inactivity at sea, platoon and company exercises as well as full scale battalion manoeuvres. Weapon training was carried out on newly constructed rifle ranges. The 2/4th was an Infantry Battalion but the soldiers also had training with an anti-aircraft regiment when the Italians entered the war and it was necessary for the soldiers to have knowledge of of the new 3.7 inch A A guns, until specialist anti-aircraft soldiers arrived. Learning about 'predictors, rangefinders, breech-blocks, fuse settings, angles of elevation, angles of descent, lines of fire, tradictories and all the technicalities of artillery procedure' was very different from 'digging trenches, shooting on 500 yard ranges and generally mastering the fine art of field exercises'. (White over Green p44)

A description of the camp, once the soldiers had settled in, is provided on page 36 of White over Green:


Before long, Julius Camp typified the Australians' habit of giving a neat appearance to places which were otherwise remote, raw and uninviting. Trees were planted, even flowers were grown; and borders of whitewashed stones depicted the home towns of the troops occupying the tents. Places such as Wagga Wagga, Kings Cross, Ingleburn were featured.

There were health issues in Palestine including rabies, dysentery and diarrhoea and special care needed to be be taken with drinking water and drains were constantly checked. The troops were also warned against involvement with native women.

During the nine months there were many changes in location. Early in May the battalion moved to an new camp at Qastina, six miles north of Julius and in August they moved to Acre, north of Haifa, before relocating again to Kilo 89 near Gaza.

It was not all work in camp. The first leave was granted early in March and many of the soldiers took the opportunity to visit Tel Aviv. During the next few months leave would be given to visit other locations including Jerusalem or Haifa. Leave passes were often written on scraps of paper -

Among Dad's papers I found this bus ticket for Acre-Haifa Omnibus Company.

In October 1940, Ken with other soldiers went to Cairo on leave and an article in the Australian Womens Weekly reported on how the leave was spent.
Many sports were played in camp and often inter-unit competitions would be organised and sometimes games were played against local teams - soccer for instance. Sports included boxing, soccer, rugby union and cricket. Athletics carnivals and swimming carnivals were also organised. Ken Moses and Phil Smith were two of the swimmers representing the 2/4 Battalion at a carnival at Haifa in 1940. There was also an AIF race meeting at Barbara which was a popular attraction. 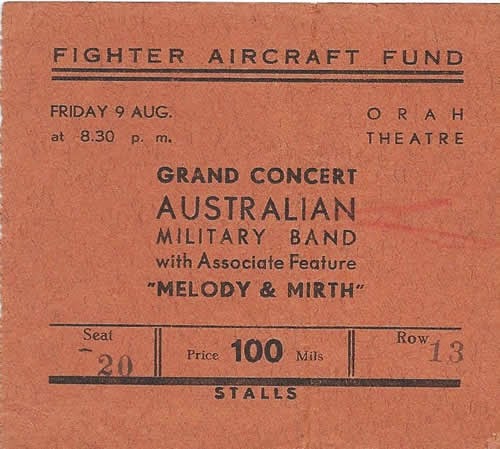 Other entertainment was also provided. The Battalion had its own brass band and a pipe band.There were also opportunities to attend concerts such as the one put on by the Australian Military Band at the Opah Theatre on 9 August 1940. The program included, as well as pieces played by the band, solo performances and a comedy sketch. Proceeds from the concert went to the Fighter Aircraft Fund.

During the first month in camp a regular mail service was established. As well as mail from families parcels were distributed by the Australian Comforts Fund. Often the parcels contained items such as tobacco and cigarette papers which could not always be obtained locally. The Bourke Patriotic Association kept in touch with the men who enlisted from the district and Ken received a number of parcels from them when he was overseas.

Anzac Day 1940 was the 25th anniversary of the Gallipoli landing. Three hundred members of divisional and brigade units, led by the two 2/4th Battalion bands, marched through the streets of Tel Aviv. A ceremony was observed followed by a lunch for those who took part. In Gaza 200 men from the battalion attended a service at the War Cemetery while another 40 attended a service in Jerusalem.

In June 1940 Italy entered the war resulting in changes to routine in the camps, including the establishment of air raid precautions, and anti-aircraft posts were manned constantly. Companies and platoons acted as security guards at various locations including at Gaza airport and also in Jerusalem. Some troops were attached to the Palestine Police when raids were made on villages suspected of harbouring enemy aliens. In mid July Italian aircraft commenced bombing Haifa, including the oil tanks near the bay. A second air raid occurred nine days later. After the raids the troops were involved in the clean-up operations and providing assistance to the civilian population. Blood donations were also required. In August the unit returned to being an infantry battalion.Training intensified and there were lectures and demonstrations in gas attack and protection, map reading, message writing and camouflage. Selected men were also trained as snipers and tank hunting was also part of the training.

Toward the end of their time in Palestine the battalion spent time at a rest camp at Hadera where there was access to a surf beach. As a life saver from Manly, Ken with a number of other soldiers acted as life savers - a necessary service as some of the soldiers were unable to swim.

By 3 November 1940, the first anniversary of the establishment of the 2/4th Battalion, the battalion had relocated eight times during the twelve months. The men had trained hard and were ready for the next step which came on 9 November when they were ordered to leave for Egypt.
Posted by Vicki's Blog at 11:51