The HMT Ranjula finally sailed from Port Tewfig at 2.30 pm on 19 February 1942. They were returning to Australia. The men quickly adapted to the shipboard routine of parades, guard duties and domestic chores as well as lifeboat drills and company and platoon sand-table exercises. The Rajula reached Colombo on 4 March but there was no shore leave. Stores, oil and water were loaded and two days later the Ranjula, in a convoy with four other troopships plus two tankers set off for Fremantle, arriving on 20 March. This time there was shore leave before the ship left in a convoy of seven ships escorted by five other ships for Adelaide on 22 March.
The ship arrived at Port Adelaide on 27 March. The troops travelled to Mount Lofty where the unit took over Crafers Hotel for battalion headquarters. The men were stationed in other houses and halls and some were billeted with civilians. This was luxury compared with more recent accommodation. Training programs were implemented and undertaken. The men attended a church parade at Stirling Oval to observe Anzac Day. In the last week of April they were on their way back to Sydney for seven days home leave.

However from this telegram Ken Moses appears to have had only a few days in Adelaide before travelling to Sydney on 30 March.

The next part of the 2/4th Battalion story was to take them to northern Australia and Papua New Guinea, however Ken's war was over. A medical certificate dated 22 June stated that Ken was unfit for military service. 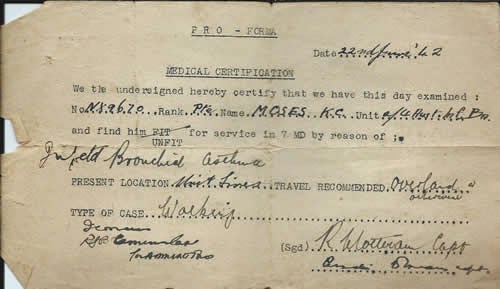 A communication from Australian Military Forces - Eastern Command, stamped 18 August 1942, advised Ken his discarge from the A.I.F would take effect as from 16 September 1942.

Initially Ken returned to Bourke and an article in the Western Mail 21 August 1942 reported that three privates including K Moses attended the first anniversary of the Bowls Club. He then worked as an overseer on Victoria Downs, Morven, in Queensland. On Anzac Day 1943 Ken attended the Morven Anzac Day commemoration where he gave the address.

Although Ken returned to the bush when discharged from the Army he eventually realised that his health no longer allowed him to work in that environment, particularly if there was dust. He therefore travelled to the city to become a journalist working first in Sydney before moving to Melbourne.

When he moved to Melbourne Ken kept in touch with the men he had served with in the 2/4th.  Ken regularly attended the Anzac Day Dawn Service and March at the Shrine. Each year we hear stories of people with birthdays on Christmas Day feeling that they don't actually celebrate their birthday. My mother's birthday is on Anzac Day and it was accepted and expected that Dad would not be home. It was not unusual for former Army mates of Dad to ring Mum during the week before Anzac Day to wish her a happy birthday. It was a date they all remembered.

When the battalion history was to be written Ken was a member of the Unit History Editorial Committee as a co-author and editor. The work of the committee resulted in the publication of the book White over green in 1963.

Ken was also a member of the local RSL. Continuing his interest in swimming he helped organise a swimming carnival in Victoria for returned servicemen and for many years one of the trophies was named in his honour.

Although Ken didn't talk directly about his service in the Army, the family knew and respected that his army experiences remained an important part of his life. Unfortunately the health problems that developed when he was overseas worsened resulting in chronic asthma. Pneumonia and pleurisy were common illnesses, particularly during winter. He was unable to give up the smoking habit developed (and encouraged) in the Army which further complicated his lung problems resulting in emphysema.

On 16 September 1984 Ken died at Greenslopes Repatriation Hospital in Brisbane. He was 66. As he was a returned serviceman, members from a local RSL in Brisbane attended the funeral service and the Last Post was played. A moving tribute that was really appreciated by Ken's family.
Posted by Vicki's Blog at 16:46